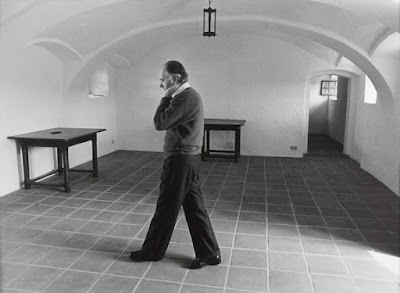 Q: Why are you so allergic to interviews?

A: Try to picture yourself being shackled hand and foot to a tree, and someone firing a machine gun at you. Don’t you think that would make you a bit tense?

Q: You're always presented as a kind of loner in the mountains, the man from the farm...

A: What can you do. You get a name, you're called "Thomas Bernhard", and it stays that way for the rest of your life. And if at some point you go for a walk in the woods, and someone takes a photo of you, then for the next eighty years you're always walking in the woods. There's nothing you can do about it.

"His description of Salzburg well exemplifies Bernhard's notoriously hyperbolic prose style: "This city of my fathers is in reality a terminal disease which its inhabitants acquire through heredity or contagion. If they fail to leave at the right moment, they sooner or later either commit suicide, directly or indirectly, or perish slowly and wretchedly on this lethal soil with its archiepiscopal architecture and its mindless blend of National Socialism and Catholicism. Anyone who is familiar with the city knows it to be a cemetery of fantasy and desire, beautiful on the surface but horrifying underneath".

JEAN-LOUIS RAMBURES: In An Indication of the Cause, you describe Salzburg as “a fatal illness that its inhabitants fall prey to at the moment of their birth.”  Isn’t that a bit of an exaggeration?

THOMAS BERNHARD:. Walk into any restaurant in Salzburg.  At first glance you’ll get the impression that these are just nice, decent people.  But if you eavesdrop on your tablemates, you’ll notice that they’re dreaming of nothing but extermination and the gas chambers.  I’ve got a splendid anecdote for you.  Not long after An Indication of the Cause came out, the German critic Jean Améry took me aside and said to me, “You can’t talk like that about Salzburg.  You’re forgetting it’s one of the most beautiful cities in the world.”  A few days later, after I’d read his review of my book in the Merkur, which I was still fuming over, because he’d understood absolutely nothing, I heard a piece of news over the television: the previous day Améry had killed himself, and in Salzburg of all places.  That’s no coincidence.  Just yesterday three people threw themselves into the Salzach.  Everybody blamed it on the föhn.  But I’m certain that there’s something about that town that physically weighs down on people and ultimately destroys them.

JEAN-LOUIS RAMBURES: Still, it seems that you have an extraordinary gift for detecting monsters everywhere.

THOMAS BERNHARD: All human beings are monsters as soon as they show their armor.  Incidentally, I know myself well enough to notice when I’m projecting my feelings onto other people.  To be sure, I am fascinated by monstrousness, but believe me:  I never make it up.  If reality strikes you as less outrageous than my contrivances, that’s just because in the real world the facts come to light in a piecemeal fashion.  In a book you’re unconditionally bound to avoid empty stretches.  The secret consists in inexorably piling up sheaves of reality more or less as one would in the initial abortive drafts of a manuscript.  Perhaps this is what commonly goes by the name of imagination.

“We always wonder, when we see two people together, particularly when they're actually married, how these two people could have arrived at such a decision, such an act, so we tell ourselves that it's a matter of human nature, that it's very often a case of two people going together, getting together, only in order to kill themselves in time, sooner or later to kill themselves, after mutually tormenting each other for years for for decades, only to end up killing themselves anyway, people who get together even though they probably clearly perceive their future of shared torment, who join together, get married, in the teeth of all reason, who against all reason commit the natural crime of bringing children into the world who then proceed to be the unhappiest imaginable people, we have evidence of this situation wherever we look... People who get together and marry even though they can foresee their future together only as a lifelong shared martyrdom, suddenly all these people qua human beings, human beings qua ordinary people... enter into a union, into a marriage, into their annihilation, step by step down they go into the most horrible situation imaginable, annihilation by marriage, meaning annihilation mental, emotional, and physical, as we can see all around us, the whole world is full of instances confirming this... why, I may well ask myself, this senseless sealing of the bargain, we wonder about it because we have an instance of it before us, how did this instance come to be?”
― Thomas Bernhard, Correction

Or you go to see people with lots of children, because you sometimes want that yourself too. I’ve quite enjoyed that, for an hour, but for me an hour-and-a-half is already too long. The children draw pictures there and show them off. Then they put on a play, and their parents are fascinated. But it’s all actually ghastly. And their lives are completely empty; these people have really got completely empty lives; they’ve really got nothing but their children and a job and otherwise nothing, otherwise absolutely nothing. Not a speck of imagination, and no interests of any kind either, nothing of any kind at all. They spout such utterly inane blather, and their children, who of course are charming and wonderful, become exactly like them: insignificant, abhorrent adults, fat or thin, but stupid.

We approach philosophy with extreme caution, I said, and we fail. Then with resolution, and we fail. Even if we approach it head-on and lay ourselves open, we fail. It’s as though we had no right to any share in philosophy, I said. Philosophy is like the air we breathe: we breathe it in but we can’t retain it for long before breathing it out. All our lives we constantly inhale it and exhale it, but we can never retain it for that vital extra moment that would make all the difference.
–Thomas Bernhard, Extinction

Everyone, he went on, speaks a language he does not understand, but which now and then is understood by others. That is enough to permit one to exist and at least to be misunderstood.
Thomas Bernhard, Gargoyles

All our lives we put off the big questions until they form a huge mountain which darkens our lives. But by then it is too late. We ought to have enough courage not to be afraid of other people or of ourselves; we ought not to spare them, to deceive them by sparing them.
–Thomas Bernhard, Gathering Evidence

We enter a world which precedes us but is not made for us, and we have to cope with this world…but if we survive…we must take care to turn this world, which was a given world but not made for us or ready for us, a world which is all set in any case, because it was made by our predecessors, to attack us and ruin us and finally destroy us, nothing else, we must turn it into a world to suit our own ideas, acting first behind the scenes, inconspicuously, but then with all our might and quite openly, so that we can say after a while that we’re living in our own world, not in some previous world, one that is always bound to be of no concern to us and intent upon ruining and destroying us…

My parents believed that they were bringing me up, but they actually destroyed me, just as they destroyed my brother and my sisters. Instead of talking about bringing me up, they should have talked about bringing me down. Thanks to their upbringing, which was purely and simply a process of destruction, as I have said, everything in my mind was mutilated beyond recognition, to borrow a phrase that is normally used in a different context.
–Thomas Bernhard, Extinction

We’re often led to exaggerate, I said later, to such an extent that we take our exaggerations to be the only logical fact, with the result that we don’t perceive the real facts at all, only the monstrous exaggeration. I’ve always found gratification in my fanatical faith in exaggeration, I told Gambetti. On occasion I transform this fanatical faith in exaggeration into an art, when it offers the only way out of my mental misery, my spiritual malaise. I’ve cultivated the art of exaggeration to such a pitch that I can call myself the greatest exponent of the art that I know of. I know of none greater. No one has carried the art of exaggeration to such extremes, I told Gambetti, and if I were suddenly asked to say what I really was, secretly, I’d have to say that I was the greatest artist I knew in the field of exaggeration.
–Thomas Bernhard, Extinction