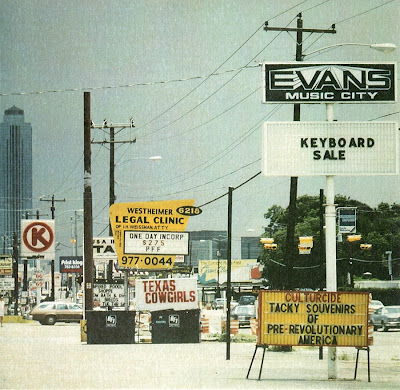 
"When we embarked on recording the LP, which took many painful years, two band members quit over it. It was okay as a piece of a live show, but to make it the next LP was not acceptable. Also, I remember having to cajole some of the engineers we worked with. It was very hard to explain that LP before it existed. To walk into a recording studio and hand them a Bruce Springsteen single and say     "put this on tracks one and two"....It was a hard sell."

"I remember the process - the money, the recording sessions, the creative decisions - as one of the most grueling creative experiences of my life. Ironically, reviewers all seemed to think we made it in one night after a couple of six-packs."


"The legal consequences never came but we pretended they had. I felt everyone wanted us to be punished, and once they thought we had been, they'd leave us alone. And that's exactly what happened. We got two calls and I never responded. We were nothing...it wasn't worth their while"

Color My World With Pigs 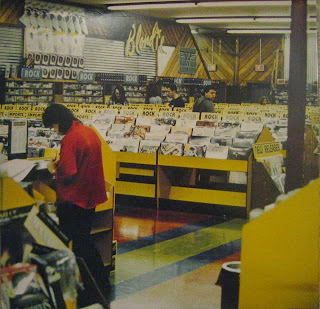 The Curse of Development

We can state the root cause of the Dwight-Phyllis dynamic as follows: the depth of any transaction is limited by the depth of the shallower party. A trivial example: if you speak English and French, and your friend only speaks English, you will be forced to converse in English. Psychological development is more complex and continuous than the acquisition of multiple discrete languages, but the same principle applies...

If the situational developmental gap between two people is sufficiently small, the more evolved person will systematically lose [a match of wits] more often than he/she wins.

This is the curse of development. Here's a picture: when you develop psychologically, and leave somebody behind, your odds of winning get worse before they get better...

At the level of abstraction that we are concerned with, all theories of developmental psychology- Freud's, Piaget's, Erikson's, Maslow's- say roughly the same thing about arrested development: you are born Clueless and clue in fits and starts. Bits of you get stuck and left behind at different points, and eventually you exhaust your capacity for real change and stall... That trail of developmental debris and eventual exhausted stalling is your particular pattern of arrested development...

1. Your development is arrested by your strengths, not your weaknesses.
2. Arrested-development behaviour is caused by a strength-based addiction.
3. The mediocre develop faster than either the talented or the untalented.

An alternative way of looking at these three laws is to note that defense mechanisms emerge to sustain addictions even when the developmental environment that originally nourished it vanishes....overperformance is caused by arrested development around a strength, which has been hooked by an addictive environment of social rewards. Mediocrity is your best defense against addiction, and guarantor of further open-ended psychological development...

We can now explain why you are likely to lose in the Curse of Development Zone... 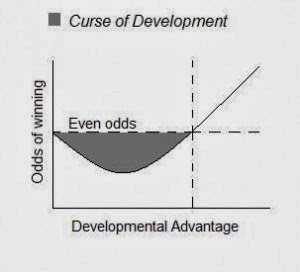 1. The less-developed person does not know what he/she does not know and is typically attempting to operate from their regressed comfort zone of strength, which to you represents a zone of unrewarding mediocrity that you are attempting to leave/have left behind. This lends your opponent confidence.

2. Your knowledge is fresh, unstable, and not yet ingrained as second nature. You are acutely aware of, and anxious about, your beginner status at your new level. This makes you lack confindence.

3. To win through persuasion, you must teach (a superior-inferior transaction) without first reversing the default unfavourable status relationship (you: not confident, low-status, he/she: confident, high-status).

...A rule of thumb in the teaching profession states that to be an effective teacher at a given level, you need to have studied five years beyond that level. This has nothing to do with subject-matter expertise and everything to do with trying to exit the Curse of Development zone.

In various parts of the world there are societies in which a sister's son teases and otherwise behaves disrespectfully toward his mother's brother. In these instances the joking relationship seems generally to be asymmetrical. For example the nephew may take his uncle's property but not vice versa; or, as amongst the Nama Hottentots, the nephew may take a fine beast from his uncle's herd and the uncle in return takes a wretched beast from that of the nephew...
The nephew is disrespectful and the uncle accepts the disrespect. There is inequality and the nephew is the superior. This is recognized by the natives themselves. Thus in Tonga it is said that the sister's son is a "chief" (eiki) to his mother's brother, and Junod quotes a Thonga native as saying "The uterine nephew is a chief! He takes any liberty he likes with his maternal uncle!" Thus the joking relationship with the uncle does not merely annul the usual relationship between the two generations...the nephew's superiority to his mother's brother takes the opposite form of permitted disrespect.

+Joking between Hui and Han Villages in China