"Post-politics thus begins from the premise of consensus and cooperation.  Real antagonism or dissent is foreclosed.  Matters previously thought to require debate and struggle are now addressed as personal issues or technical concerns.  We might think of the ways that the expert discourses of psychology and sociology provide explanations for anger and resentment, in effect treating them as syndromes to be managed rather than as issues to be politicized.  Or we might think of the probabilities, measures, and assessments characteristic of contemporary risk management.  The problem is that all this tolerance and attunement to difference and emphasis on hearing another’s pain prevent politicization.  Matters aren’t represented—they don’t stand for something beyond themselves. They are simply treated in all their particularity, as specific issues to be addressed therapeutically, juridically, spectacularly, or disciplinarily rather than being treated as elements of larger signifying chains or political formations."
-Jodi Dean
“As neoliberalism converts every political or social problem into market terms, it converts them to individual problems with market solutions. Examples in the United States are legion: bottled water as a response to contamination of the water table; private schools, charter schools, and voucher systems as a response to the collapse of quality public education; anti-theft devices, private security guards, and gated communities (and nations) as a response to the production of a throwaway class and intensifying economic inequality; boutique medicine as a response to crumbling health care provision; “V-chips” as a response to the explosion of violent and pornographic material on every type of household screen; ergonomic tools and technologies as a response to the work conditions of information capitalism; and, of course, finely differentiated and titrated pharmaceutical antidepressants as a response to lives of meaninglessness or despair amidst wealth and freedom. This conversion of socially, economically, and politically produced problems into consumer items depoliticizes what has been historically produced, and it especially depoliticizes capitalism itself. Moreover, as neoliberal political rationality devolves both political problems and solutions from public to private, it further dissipates political or public life: the project of navigating the social becomes entirely one of discerning, affording, and procuring a personal solution to every socially produced problem. This is depoliticization on an unprecedented level: the economy is tailored to it, citizenship is organized by it, the media are dominated by it, and the political rationality of neoliberalism frames and endorses it.”
-Wendy Brown

The End of the Road 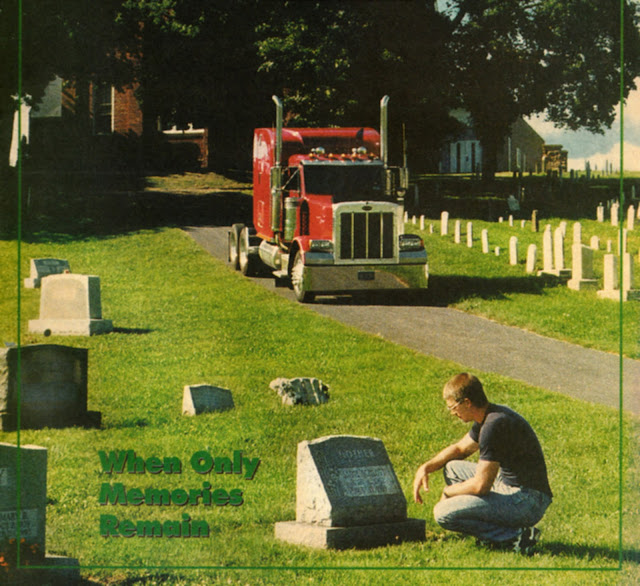 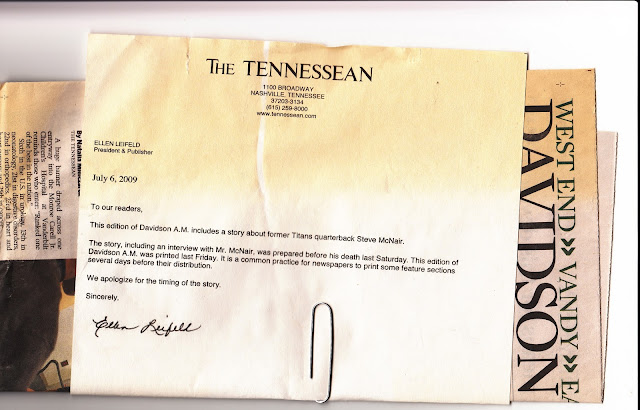 Till Eulenspiegel and the Innkeeper at Cologne


Till Eulenspiegel journeyed to Cologne, where he stayed at an inn for two or three days without letting anyone know who he was. During this time he noticed that the innkeeper was a rogue, and he thought, "The guests will not be well off where the innkeeper is a rogue. You should find another place to stay."
That evening he told the innkeeper that he would be looking for another place to stay. The latter showed the other guests to their beds, but not Eulenspiegel, who then said, "Sir, I paid just as much for my lodging as the others did, but you showed them to their beds. Am I supposed to sleep here on this bench?"
The innkeeper said, "Look! Here is a pair of sheets!" and he let a fart. Then he let another one and said, "Look! This is your pillow!" Then for a third time he let one, until it stank, and he said, "Look! Now you have an entire bed! Use them until morning, and then lay them in a pile for me, so I can find everything together!"
Eulenspiegel said nothing, but thought, "Look! Take note that one rogue deserves another rogue." And that night he slept on the bench.

Now the innkeeper had a nice folding table. Eulenspiegel opened up the leaves, shit a large pile on the table, and then closed it up again. He got up early in the morning, went to the innkeeper's room and said, "Sir, I thank you for the night's lodging." Then letting a large fart, he said, "Those are the feathers from your bed. I laid the pillow, the sheets, and the covers all together in a pile."
The innkeeper said, "Sir, that is good. I will look after them as soon as I get up."
Eulenspiegel said, "Do that! Just look around. You'll find them all right!" And with that he left the inn.
The innkeeper expected many guests for the noon meal, and he said that they should eat at the nice folding table. When he opened up the table, an evil stink flew up his nose. Seeing the dung, he said,
"He gives what was earned. He paid for a fart with shit."
Then the innkeeper sent for Eulenspiegel, because he wanted to get to know him better. Eulenspiegel did indeed come back, and he and the innkeeper appreciated one another's tricks so much, that from this time forth Eulenspiegel got a good bed. 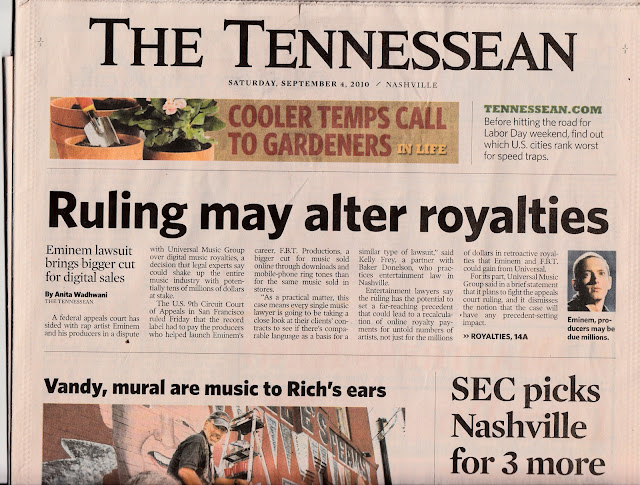 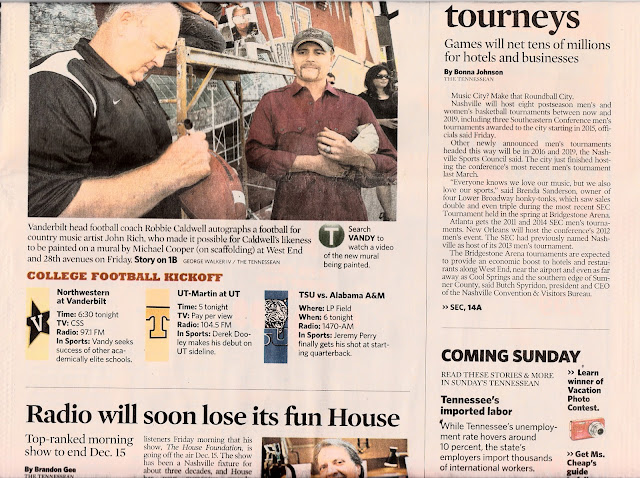 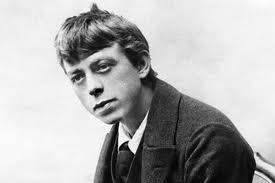 "Walser’s entire work, including his ambiguous silence of twenty-eight years, is a commentary on the vanity of all initiative, the vanity of life itself. Perhaps that is why he only wanted to be a walking nobody. Someone has compared Walser to a long-distance runner who is on the verge of reaching the longed-for finishing-line and stops in surprise, looks round at masters and fellow disciples, and abandons the race, that is to say remains in what is familiar, in an aesthetics of bewilderment. Walser reminds me of Pique mal, a curious sprinter, a cyclist in the sixties who suffered from mood swings and would sometimes forget to finish a race. 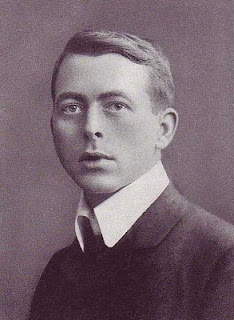 Robert Walser loved vanity, the fire of summer, women’s ankle boots, houses illumined by the sun, flags fluttering in the wind. But the vanity he loved had nothing to do with the drive for personal success, rather it was the sort that is a tender display of what is minimal, what is fleeting. Walser could not have been further from the heady heights, where power and prestige dominate: “Were a wave to lift me and carry me to the heights, where power and prestige are predominant, 1 would destroy the circumstances that have favoured me and hurl myself downwards, to the vile, insignificant darkness. Only in the lower regions am I able to breathe.” 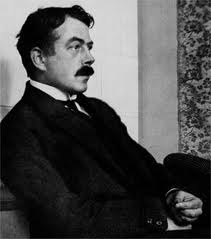 Walser wanted to be a walking nobody and what he most desired was to be forgotten. He realised that every writer must be forgotten almost as soon as he has stopped writing, because the page has been lost, has literally flown away, has entered a context of different situations and sentiments, answers questions put by other men, which its author could not even have imagined.
Vanity and fame are ridiculous. Seneca claimed that fame is horrible because it depends on the judgement of many. But this is not exactly what made Walser desire to be forgotten. More than horrible, worldly fame and vanity were, to him, completely absurd. This was because fame, for example, seems to assume that there is a proprietorial relationship between a name and a text that now has an existence, yet which that pallid name can surely no longer influence. 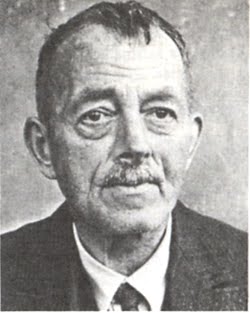 Walser wanted to be a walking nobody, and the vanity he loved was like that of Fernando Pessoa, who once, on throwing a chocolate silver-foil wrapper to the ground, said that, in doing so, he had thrown away life."
—from Enrique Vila-Matas, Bartleby & Co. 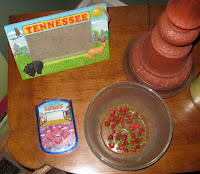 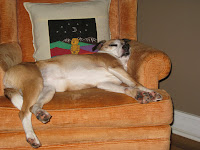 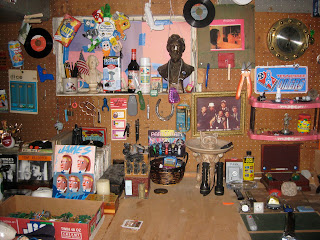 Walkin in the Sunshine 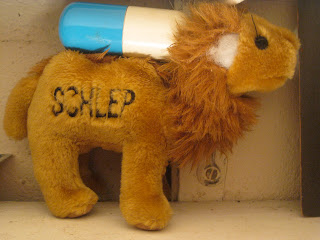 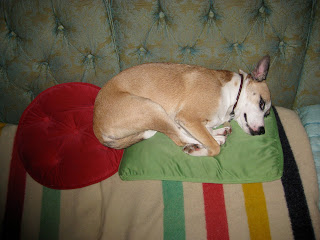 Color Photographs of World War I 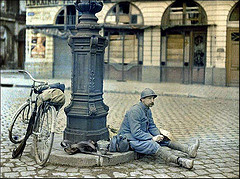 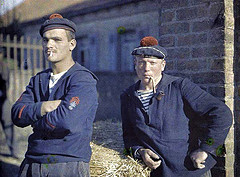 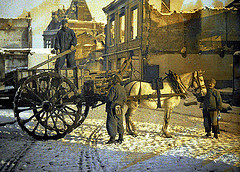 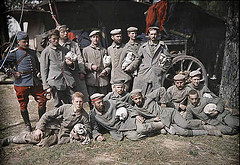 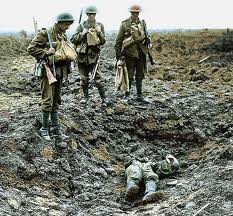 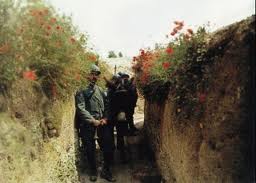 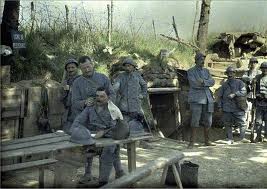 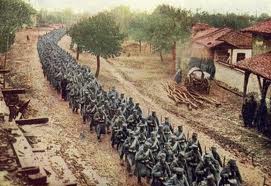 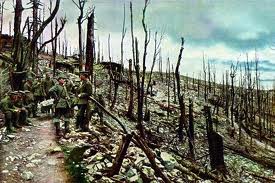 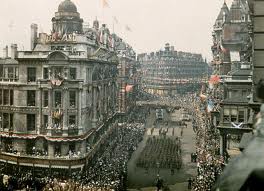 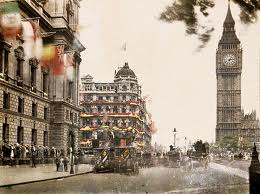 The Autochrome Lumiére was introduced in 1907 and was the primary process used to make color photographs until the introduction of color film in the 1930s. A glass plate was coated with a random mosaic of grains of potato starch died red, green, and violet. Lampblack filled the spaces between the grains. A panchromatic silver halide emulsion is added. After exposing in the camera the plate is developed then reversed as a positive. The starch grains act first as filters for the colors striking the plate and then as a viewing filters in the finished image. For example light from a green leaf will pass through the green particle and expose the emulsion under it but would not pass through the red or violet particles. On viewing by transmitted light the green color would show wherever green light hit the plate.

On a hot afternoon in Coleman, Texas, the family is comfortably playing dominoes on a porch, until the father-in-law suggests that they take a trip to Abilene (53 miles north) for dinner. The wife says, "Sounds like a great idea." The husband, despite having reservations because the drive is long and hot, thinks that his preferences must be out-of-step with the group and says, "Sounds good to me. I hope your mother wants to go." The mother-in-law then says, "Of course I want to go. I haven't been to Abilene in a long time."
The drive is hot and dusty and long.  When they arrive at the cafeteria, the food is as bad as the drive. They arrive back home four hours later, exhausted.
One of them dishonestly says, "It was a great trip wasn't it?" The mother-in-law says that, actually, she would rather have stayed home, but went along since the other three were so enthusiastic. The husband says, "I wasn't delighted to be doing what we were doing. I only went to satisfy the rest of you." The wife says, "I just went along to keep you happy. I would have had to be crazy to want to go out in the heat like that." The father-in-law then admits that he only suggested it because he thought the other might be bored.
The group sits back, perplexed that they together decided to take a trip which none of them wanted. They each would have preferred to sit comfortably, but did not admit it when they still had time to enjoy the afternoon.
http://en.wikipedia.org/wiki/Abilene_paradox
Posted by DCB at 11:50 PM 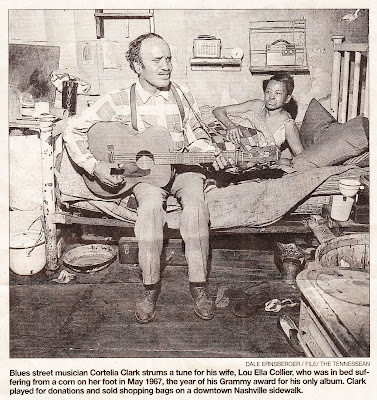 Cortelia ........... Clark
" In Nashville where I've lived for about the last ten years, up until about four years ago there was an old man there I used to go in and listen to all the time.  He sold paper bags down on Connor Street.  He was a blind man and he played guitar and he was really a great old guy.  He won a Grammy, believe it or not.  A few years ago RCA Victor went out on the street with a tape recorder and taped him while he was out there, and submitted the recording to the section that deals with authentic folk songs, and he got the Grammy that year for it.  Didn't mean that much to him as far as his pocket looked.  As a matter of fact, it really didn't mean much to him at all, he didn't even know what it was.  Cortelia couldn't see it anyway.  I was in San Francisco playing at The Boarding House one week.  I got back home, picked up all of newspapers and went inside, started reading through them.  Found out he had burned to death in his trailer while I was gone.  I don't know how much it will mean ever to him, but this is a song I wrote about him." - Mickey Newbury
Posted by DCB at 2:18 AM