Around the time big tobacco introduced its first youth-access programs, anti-tobacco advocates had given up trying to beat the industry at the state and federal levels. These higher levels of government were too tightly controlled by the industry and were no longer very responsive to activists. So anti-tobacco proponents had begun approaching their city council members, who were more responsive and less likely to be swayed by corporate influence. Smoking bans had started to appear in local jurisdictions around the country, and progress had been made in getting smoking out of restaurants and workplaces.
Alarmed by the shift, the tobacco industry realized it was vulnerable. Because it had no similar grassroots networks to oppose these local efforts, it started retailer programs like It's the Law, We Card to defeat them.
Youth programs served the industry on several levels. They gave it cover against the charge that it targeted kids, and they generated goodwill among legislators. But these retailer programs also served another function: They gave the industry an opening to have company representatives conduct personal visits with retailers all over the country. Under the guise of instructing retailers to check for IDs as part of a youth-access program, industry representatives asked retailers to monitor political activity in their towns and paid them to report back to the Tobacco Institute at the first appearance of any problems (like citizens pushing for a smoking ban) so the institute could mobilize.
An institute document made public years later stated, "For monitoring purposes, we fund our allies in the convenience store groups to regularly report on ordinance introductions and assist in campaigns to stop unreasonable measures... Promotion of the Institute's It's the Law program and other industry programs play a helpful role."
Retailers as well as restaurant and bar owners across the country started phoning the Tobacco Institute to let it know about "trouble" in their area, and the industry responded by flying representatives to those towns to generate and coordinate strident opposition- or at least the appearance of strident opposition- to the anti-smoking efforts.
In addition to using youth programs to help fight smoking bans, the industry used them to help fight cigarette taxes and marketing restrictions. The programs also generated goodwill with the governments of some foreign countries and even allowed Philip Morris to partner with foreign health ministries. In 2001 the company announced that it was "actively involved in more than 130 [youth-smoking prevention] programs in more than 70 countries."  -from "Deadly Spin" by Wendell Potter
Posted by DCB at 3:33 PM

CS I Love You 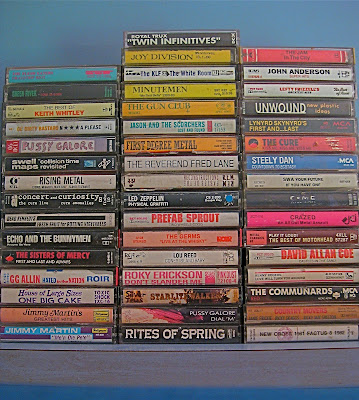 Colorado Chiller didn't taste as good as the other leading coolers, Bartles and Jaymes and California Cooler. In fact, after just a few minutes in bright light the product turned, in technical brewing terms, "skunky". One Coors executive served the skunky drink at an outdoor barbecue, much to his embarrassment. As he later put it, "The penguins in the ad should say, 'Less Chilling...Tastes like Shit.'"
According to research, wine cooler drinkers in 1985 were young upscale women who were searching for an alternative to drinking beer. Yet when they tried Colorado Chiller they tasted beer not wine. As one Chiller drinker said, "It's as if a beer company tried to pull one over on us, calling it a cooler and then serving beer." Now why would a beer company do something like that?
The company's next foray into the new products arena was another "me too" counterattack product. The ignominious Herman Joseph's was a "super premium", or higher-priced beer, that was supposed to compete with the established and popular Michelob and Lowenbrau, and never did turn a profit.
Contributing to the product's malaise was the odd brand name, which had been chosen to pay homage to a deceased Coors family member. In truth "Herman Joseph's" sounded more like a brand of men's designer clothing...The product's drab bottle, which lacked the distinctiveness and class of Michelob's (a patented tear-drop shape) and Lowenbrau's (which featured gold and silver foil wraps) didn't help either...One final effort was made in 1987 to resuscitate the brand. Attempting to cash in simultaneously on all of the crazes in beer marketing, the company renamed the product "Herman Joseph's Original Draft Light" and expanded distribution to twenty states...
Chuck Yeager had been hired because someone at Coors thought he could provide the inspiration to back Herman Joseph's new advertising theme: Take off with Herman Joseph's Original Draft Light."
The legendary pilot had an unenviable task. To begin with, Yeager, as Big Tim correctly observed, "didn't know a fucking thing about beer". Additionally, aviation heroes, whose piloting of multi-billion dollar planes required excellent hand-eye coordination and split second decision making, weren't exactly the most credible advocates for drinking beer.
Yeager deviated signifigantly from the script on his teleprompter. Most of his speech centered on the difficulty of flying jets, especially when pilots "urinated and defecated in their flight suits when they lost consciousness," or how jet pilots had to "urinate in their flight suits because there was no way to tailor the flight suits to urinating in the cockpit." Finally after a rambling twenty-five minutes, Yeager brought his talk back to beer by concluding, "And I'm sure that you're all going to make Herman Joseph's soar next year"...The cosmetic change to the brand name didn't fool consumers...After almost a decade of testing, the company finally stopped brewing Herman Joseph's in 1989.

-from "Silver Bullets: A Soldiers Story of How Coors Bombed in the Beer Wars" by Robert J. Burgess

I don't know how far I'm going to have to go
To see my own self or to hear my own voice
I tuned in on the radio and for hours never heard it
And then I went to the moving pictures show
And never heard it there
I put handsful of coins into machines and watched records turn
But the voice there was no voice of mine
I mean it was not my voice
The words not my words that I hear in my own ears
When I walk along and look at your faces
I set here in a Jewish delicattassen, I order a hot pastrami
Sandwitch on rye bread and I hear the lady ask me
Would you like to have a portion of cole slaw on the side
And I knew when I heard her speak that
She spoke my voice
And I told her I would take my slaw on a side dish
And would like to have a glass of tea with lemon
And she knew that I was speaking her words
And a fellow sat across at a table near my wall
And spoke while he ate his salami and drank his beer
And somehow I had the feeling
As I heard him speak, and he spoke a long time,
But not one word was in my personal language,
And I could tell by the deep sound, by the full tone
Of his voice that he spoke my language
I suppose you may wonder just how he could speak
In a dialect that I could not savvy nor understand
And yet understand every sound that he made

You're always presented as a kind of loner in the mountains, the man from the farm...


What can you do. You get a name, you're called "Thomas Bernhard", and it stays that way for the rest of your life. And if at some point you go for a walk in the woods, and someone takes a photo of you, then for the next eighty years you're always walking in the woods. There's nothing you can do about it.

"When performers make a slip of some kind, clearly exhibiting a discrepancy between the fostered impression and a disclosed reality, the audience may tactfully 'not see' the slip or readily accept the excuse that is offered for it. And at moments of crisis for the performers, the whole audience may come into tacit collusion with them in order to help them out...and with much delicacy help sustain the quite false impression that they have not  absorbed the meaning of what has happened." -Erving Goffman