In my eyes grief dissolves;
I ran like a deer;
Tree-gnawing wolves
In my heart followed near.
I left my antlers
A long time ago;
Broken from my temples,
They swing on a bough.
Such I was myself:
A deer I used to be.
I shall be a wolf:
That is what troubles me.
A fine wolf I'm becoming.
Struck by magic, while
All my pack-wolves are foaming,
I stop, and try to smile.
I prick up my ears
As a roe gives her call;
Try to sleep; on my shoulders
Dark mulberry leaves fall.

With its population made up of two categories of people, those who do business and those upon whom they prey, the city has only a painful life to offer the young person who goes there to learn and to study; for sooner or later anyone who lives there, whatever his constitution, becomes disturbed and is eventually deranged and destroyed by the city, often in the most deadly and insidious manner.
--Thomas Bernhard, Gathering Evidence
“Those who live in the country get idiotic in time, without noticing it, for a while they think it's original and good for their health, but life in the country is not original at all, for anyone who wasn't born in and for the country it shows a lack of taste and is only harmful to their health. The people who go walking in the country walk right into their own funeral in the country and at the very least they lead a grotesque existence which leads them first into idiocy, then into an absurd death.”
-- Thomas Bernhard, The Loser
Posted by DCB at 4:50 PM

The Artist's Fight With Art

"Compared with the average professional man, the artist has, so to say, a hundred percent vocational psychology. That is, the creative type nominates itself at once as an artist...which marks the subordination of the individual to one of the prevailing art-ideologies, this usually showing itself in the choice of some recognized master as the ideal pattern...in becoming the representative of an ideology...at first his individuality vanishes, until later, at the height of his achievement, he strives once more to liberate his personality...from the bonds of an ideology he has himself accepted and helped to form. This whole process of liberation is so particularly intense...exposing the artist to those dangerous crises which threaten his artistic development and his whole life....In this creative conflict it is not only the positive tendency to individual self-liberation from ideologies once accepted and now overcome that plays a great part. There is also the creative guilt feeling, and this opposes their abandonment and seeks to tie down the individual in loyalty to his past. This loyalty is itself opposed
by a demand for loyalty to his own self-development, which drives him onward...So the struggle of the artist against art is really only an ideologized continuation of the individual struggle against the collective; and yet it is this very fact of the ideologization of purely psychical conflicts that marks the difference between the productive and the unproductive types, the artist and the neurotic; for the neurotic's creative power, like the primitive artist's, is always tied to his own self and exhausts itself in it, whereas the productive type succeeds in changing this purely subjective creative process into an objective one, which means that through ideologizing it he transfers it from his own self to his work...an actual artistic achievement....A characteristic quality of the unconforming type, both the productive (artist) and the thwarted (neurotic), is an overstrong tendency towards a totality of experience. The so-called adaptability of the average man consists in a capacity for an extensive partial experience such as is demanded by everyday life, with its many and varied problems. The non-conforming type tends to concentrate its whole personality, its whole self, on each detail of experience, however trivial or insignificant; but as this is not only practically impossible but psychically painful (because its effect is to bring out fear) this type protects itself from complete self-exhaustion by powerful inner restraints. Now the neurotic stops at this point in the process, thus cutting himself off from the world and experience...faced with the proposition "all or nothing" he chooses the nothing. The artist, however....finds a constructive middle way; he avoids the complete loss of himself in life...by living himself out entirely in creative work."
- Otto Rank , Art and Artist, 1932
Posted by DCB at 4:55 AM 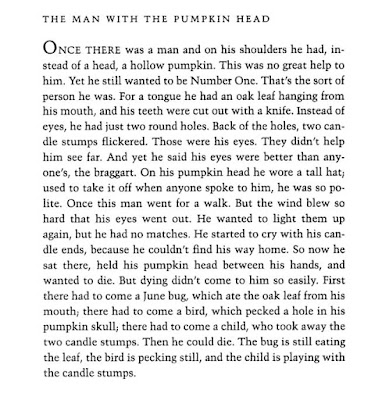