All the guests assembled to hear the official announcement at 9 o'clock. They were completely stunned when they realized that the news was genuine. They were left alone on the assumption that they would discuss the position and the following remarks were made.:–

HARTECK: They have managed it either with mass-spectrographs on a large scale or else they have been successful with a photo-chemical process.

WIRTZ: Well I would say photo-chemistry or diffusion. Ordinary diffusion. They irradiate it with a particular wave-length. – (all talking together).

HEISENBERG: Yes, of course, if you do it like that; and they seem to have worked on that scale. 180,000 people were working on it.

HARTECK: Which is a hundred times more than we had.


HEISENBERG: We wouldn't have had the moral courage to recommend to the Government in the spring of 1942 that they should employ 120,000 men just for building the thing up.

WEIZSÄCKER: I believe the reason we didn't do it was because all the physicists didn't want to do it, on principle. If we had all wanted Germany to win the war we would have succeeded.

HAHN: I don't believe that but I am thankful we didn't succeed.

HEISENBERG: It is possible that the war will be over tomorrow.

HARTECK: The following day we will go home.


KORSHING: If one hasn't got the courage, it is better to give up straightaway.

KORSHING: The Americans could do it better than we could, that's clear.


WEIZSÄCKER: I admit that after this business I am more ready to go back to GERMANY, in spite of the Russian advance.

WIRTZ: My worst fears have been realized with regard to the complications which will now arise about us.

HEISENBERG: I believe that we are now far more bound up with the Anglo–Saxons than we were before as we have no possibility of switching over to the Russians even if we wanted to.

WIRTZ: They won't let us.

HEISENBERG: On the other hand we can do it with a good conscience because we can see that in the immediate future GERMANY will be under Anglo–Saxon influence.

WIRTZ: That is an opportunist attitude.

HEISENBERG: But at the moment it is very difficult to think otherwise because one does not know what is better.

Although the guests retired to bed about 1.30, most of them appear to have spent a somewhat disturbed night judging by the deep sighs and occasional shouts which were 12 heard during the night. There was also a considerable amount of coming and going along the corridors.
Posted by DCB at 12:04 AM 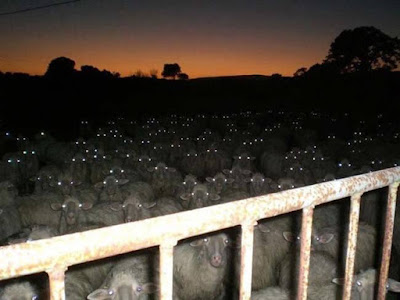