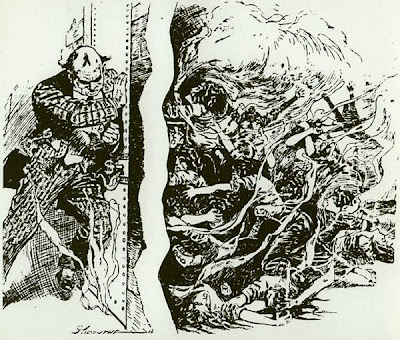 Following the 1911 Triangle Shirtwaist Factory fire the New York State Legislature created the Factory Investigating Commission to "investigate factory conditions in this and other cities and to report remedial measures of legislation to prevent hazard or loss of life among employees through fire, unsanitary conditions and occupational diseases."

How did businessmen and business groups respond?

"We are of the present opinion that if the present recommendations are insisted upon...factories will be driven from the city, labor will be compelled to accompany them, factories, tenements, and small houses will become tenantless with the final result of demoralization in tax collections by the city.
- Resolution adopted by the United Real Estate Owner's Association

"[These changes in the fire code will lead to] the wiping out of industry in this state."
- Spokesman for the Associated Industries of New York

"This condition is depreciating the value of real estate, restricting its marketability, and driving manufacturers out of the City and State of New York."
- Resolution adopted by the Board of Governors of the Real Estate Board of New York.

"Many owners will be so financially embarrassed by the great expenditure made necessary thereby that great numbers of buildings will be forced into foreclosure or otherwise sacrificed."
- The Realty League

"You must relieve [New York's] real estate from the terrible yolk of oppression which has been throttling it for some years past..."
- Charles F. Noyes, "who represents owners of store and loft buildings in Manhattan"

"The businessmen of this country who have made and saved money should no longer be supervised, criticized, or controlled by men who have neither made nor saved it."
- State Superintendent of Banks Eugene Lamb Richards

"Thousands of factories are migrating to New Jersey and Connecticut in order to be freed from the oppressive laws of New York State...The owners of real property are becoming terrified by the number of laws which have been enacted...You can no longer distinguish the real estate owner by the smile of prosperity, because his property is now a burden and a liability instead of a source of income. To own a factory building in New York City is now a calamity.
- George W. Olvany, special counsel to the Real Estate Board.

"We have been legislated to death."
- James T. Hoyle, Secretary of the Manufacturer's Association