Years and Years of Crocodile Tears 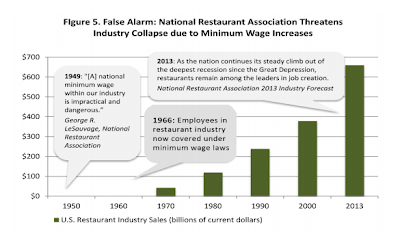 "No greater calamity could befall the wage earners of the country than to have the legislative power to fix wages upheld. Take from the citizen the right to freely contract and sell his labor for the highest wage which his individual skill and efficiency will command, and the laborer would be reduced to an automaton - a mere creature of the state. It will logically, if persisted in, end in social disorder and revolution."
- D.C. District Court Judge J.A. Van Orsdel, 1923

"The Fair Labor Standards Act constitutes a step in the direction of communism, bolshevism, fascism, and Nazism"
- National Association of Manufacturers, 1937

"The proposed jump from an hourly minimum of 40 to 65 cents...is a reckless jolt to the economic system. Living standards instead of being improved, would fall- probably to record lows."
- National Association of Manufacturers, 1945

"Any temporary advantage to our 2 million employees would be more than offset by immediate unemployment within our industry. A national minimum wage within our industry is impractical and dangerous."
- George R. LeSauvage, National Restaurant Association, 1949

-If we were compelled to pay a minimum wage of $1 an hour or more we would have to raise our rates to a level where a very large segment of the population could not afford to eat or sleep in a hotel."
- Arthur J. Packard, American Hotel Association, 1955

"The entire motion-picture industry, even in our largest centers, is balanced so delicately on the knife-edge of survival or destruction that the smallest expense could throw the balance the wrong way."
-A. Julian Brylawski, Theatre Owners of America, 1955

"I think the people who are proposing these things don't know what they are talking about. It means economic chaos for the very people they are trying to help."
- Sen. Barry Goldwater (R-AZ), 1956

"Theres is not enough mechanization or automation yet developed to save my business from the minimum wage horror."
- Ernest Kuhn, Kuhn Hotel Corporation, 1961

"Frankly, no company our size can live under such circumstances. Undoubtedly we would have to liquidate."
- Joseph E. Chastain, Lintz Department Stores, 1966

"I've often said that the minimum wage is the most anti-Negro law on the books."
- Milton Friedman, 1973

"Many of the industries and small businesses employing marginally trained or unskilled workers will be forced to cut back on the number of those employees or go out of business. The very worker that the Federal minimum wage was intended to aid will find himself out of work."
-Rep. Mickey Edwards (R-OK), 1977

"This should be called the Unemployment Act of 1977. Some economists  have contended that it will cost more than 1.8 million jobs."
- Rep. John Rousselot (R-CA), 1977

-"I am vitally concerned about the thousands of teenagers and young adults who will either lose their jobs or be rendered unemployable in the unskilled labor markets as the result of increasing the minimum wage to $2.50 or more per hour."
- Eldon Rudd (R-AZ) 1977

"What we are accomplishing by setting a minimum wage is restricting the ability of persons to freely contract for their services and, in doing so, effectively limiting their opportunities to achieve economic well-being."
- Rep. Tom Hagedorn (R-MN), 1977

"The increased minimum wage is a disaster to thousands of small husband-wife businesses whose owners are literally working themselves to death because they cannot afford the higher wage scale."
- U.S. Chamber of Commerce, 1979

"The minimum wage has caused more misery and unemployment than anything since the Great Depression.
- Gov. Ronald Reagan (R-CA), 1980

"Youth unemployment and black unemployment will drastically rise. It's amazing to me that some black leaders want an increase in the minimum wage"
- Rep. Orrin Hatch (R-UT), 1988

"When we pass minimum wage legislation it says one thing, Mr. Speaker. It says to the young black in the inner city, it says to the handicapped individual, it says to the young person looking for a first job, unless you can meet a minimum standard, we will pass a law that says it is a violation of the Federal statute to hire such a person."
- Rep. Bob McEwem (R-OH), 1989

"When the minimum wage goes up, the very people we say we want to help- the young, the unskilled, the disadvantaged- are the first people to get laid off."
- Rep. William Goodling (R-PA), 1989

"Studies have found that increases in he minimum wage encourage some teenagers to drop out of school earlier than they otherwise would."
- N. Gregory Mankiw, 2001

"Mr. Speaker, in America, we can either have maximum opportunity or we can have minimum wages. We cannot have both. In the land of the free, in a Nation as great as ours, how can we deny people their maximum opportunity, their opportunity to secure the American Dream?
-Rep. Jeb Hensarling (R-TX), 1977

"Economic freedom, not minimum-wage socialism, is the key to reducing poverty."
- James A. Dorn, Cato Institute

"I wish we could just pass a law saying everybody should make more money without any adverse consequences. The problem is you're costing jobs from those who are just trying to get an entry level job. "
-Rep. Paul Ryan, 2013